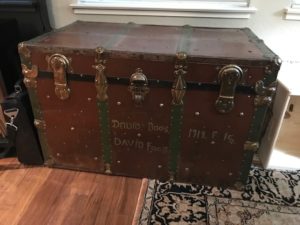 Boys, here’s another perspective—I’m the grandson of an immigrant.

My GPa was a “Volga German” from Russia, who emigrated to the US as a teenager in 1919.  See the picture below of the steamer trunk which held all his early belongings as he traveled to the US by boat.  I have it in my house and consider it a family heirloom .

He settled in Kansas, and became a wheat farmer.  My Dad was the third of three boys, all 2nd generation Americans who enlisted and fought in WWII.  GPa and GMa never learned to speak English=GPa died in his 80s, and I was never able to carry on a conversation with him without my Dad doing translation.

My Dad entered the Navy after HS, and served in the Pacific.  He came home and with the GI Bill in hand went immediately to college for a BA and a teaching credential.  It was there he met Mom and had child number one—yours truly. Upon graduation, he settled back in his home town, Bazine, Kansas, population 500.

In 1958, he moved his family of 5 (2 additional kids added) to Tracy, CA.  He was both the 6th grade teacher, and the elementary school principal at the time.  Simultaneous with that gig, he was a wheat farmer, so in June of that year, Dad finished the school year, brought in the harvest, loaded up the truck and did a “grapes of wrath” move to California.

When I graduated from Frankfurt American HS in 1969, Dad decided it was a good time to return to Tracy, where he resumed his position as Jr. High principal, and then finished his career as a 6th grade classroom teacher.

At one point in the 90s, after years of saving and investing, Dad had a stock portfolio valued at over $1M—pretty dam good for a school teacher.

I know I’m biased, but I can tell you with certainty that America is a better place for my Dad’s contributions.  I saw his impact on people over the decades, and learned much from him.

I’m uncomfortable with the over-generalized rhetoric about immigrants. Most of them simply want to work and have a better life for themselves and their families.  By the 2nd and 3rd generation, most kids of immigrants identify as Americans, and just want to be like their friends.

I don’t minimize the challenges VDH describes in his article—I know that stuff is real. But I also don’t reflexively blame the immigrants.  I think the problems have more to do with the over-reach of Govt, with welfare state practices and roadblocks imposed upon people who want to work.  To name a few of the roadblocks–unions and union dues, licensing laws, min wage laws, and housing/building restrictions the make housing less affordable.

I believe Govt is the main problem at all levels (local, state and federal), not the aspirational immigrants.

This site uses Akismet to reduce spam. Learn how your comment data is processed.